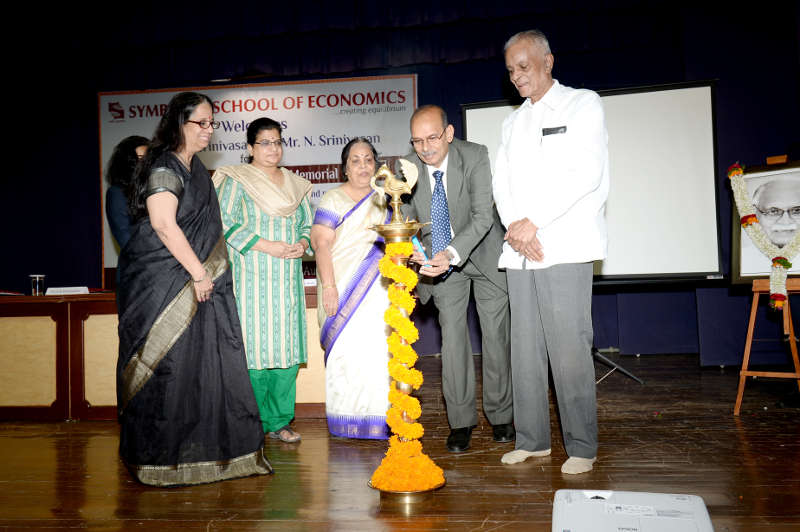 
This annual Lecture Series was first instituted in 2014 in honour of Dr. Suresh Tendulkar, an Indian economist and former chief of National Statistical Commission. The series was the brainchild of Dr. Chandiramani, Director SSE and Dean Faculty of Humanities and Social Sciences, whose association with Professor Tendulkar went back to the 90’s.

Over the years SSE has been honoured by stalwarts such as:

This year, SSE had the honour of hosting Mrs. Girija Srinivasan, International Consultant, Development Finance and Rural Livelihoods expert and Mr. N. Srinivasan, an Expert adviser and international consultant for the World Bank, ADB, CGAP, IFAD, GIZ, KFW, Bill & Melinda Gates Foundation and MicroSave. They delivered the lecture on the theme " Financial Services: Do they impact livelihood and poverty reduction?"

The event started when Dr. Chandiramani welcomed the guests and the gathering and spoke of the genesis of the lecture series. She talked about how Prof. Tendulkar’s work is a testimony and tremendous contributions towards alleviation of poverty.

Dr Mujumdar addressed the audience with a speech about the Tendulkar family and his personal experience with them. He also said that instituting a lecture in the memory of a personality as great as Prof. Tendulkar is an honour for any academic organisation.

The speakers Mr. and Mrs Srinivasan have been authors of, "State of India's Livelihoods Report" 2015 and 2016 and are in the process of writing the 2017 Report. They discussed whether financial services have led to poverty reduction and the prospects and challenges of rural livelihoods. The speakers have hands-on experience of working at the grass root level.

Mrs Girija Srinivasan took the stage for the first half of the lecture and deliberated on the topic- Do financial services result in poverty reduction? Mrs Srinivasan's lecture covered the various aspects which contribute to poverty, stressing on the inclusion of women in capacity building and enterprise formation through Self Help Groups (SHGs).

Mrs. Srinivasan talked about how microfinance has a significant positive impact on per capita income, non-land assets and poverty incidence. Microfinance fails, however, to engender positive change on other dimensions, namely non-food expenditures, per capita food expenditures, medical expenditures, and livestock…. microfinance generally has a short-term positive effect on borrowers, but that this effect is not necessarily sustained in the long-term . At the same time she enlightened us about the positive impacts of financial inclusion and stressed upon financial inclusion to eliminate poverty.

Mrs Srinivasan’s lecture was followed by Mr. N Srinivasans lecture. Mr Srinvasan had been a central banker and development banker for 30 years (in Reserve Bank of India and NABARD).  He is a student of economics, with development economics as a special interest.

The lecture he delivered concentrated on the “finance of rural livelihood”.

He talked about the size of the challenge when in it comes to rural areas.Also he put some light on the rural-urban divide and talked about increase in migration and urbanization. He also discussed the government’s effort in bringing the rural areas at par. Mr N. Srinivasan gave the several measures that can be used to improve the livelihood of the rural and which were very enlightening.

He concluded the speech by talking about that the livelihood development should be facilitated and choices should be given to people. Also there should be an increase in subsidies and investments of such institutions.
These two enlightening lectures were followed by a highly interactive question and answer session
.