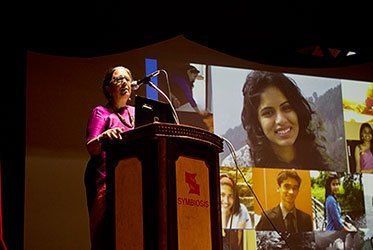 
The Foundation Day of SSE began with excitement and optimism, on the afternoon of August 4th, 2014.

The audience was warmly welcomed by Pallavi Ma’am’s introductory speech. She gave a hearty description of the previous batches and faculty members, to inspire and encourage the current students. SSE looks forward to the new academic year with the new batches.

The much-awaited oath-taking ceremony was then initiated by Ishita Ghoshal Ma’am. Finally the BSc. Student Council for the year 2014-15 was introduced, with the General Secretary’s swearing-in.

This was followed by our respected director, Dr. Jyoti Chandiramani Ma’am’s address to the audience.  She related certain student initiatives, and encouraged the batches to take an active part in all extra-curricular activities, hosted by the clubs. Her words were inspiring, and the students are excited to host and participate in various initiatives.

On that note, the newly elected Student Council members presented their individual Plans of Actions for the upcoming academic year. The highlight of which was coordination and collaboration between clubs. The new Club Heads are teeming with innovative ideas!

The attentive audience then had an active Q&A session with the council members.

The entire event was wrapped up on a musical note, with the college band’s performance.